Scott Morrison has said vaccine mandates to enter pubs and cafes should not be in place after states reach the 80 per cent vaccination threshold.

While NSW will drop vaccine passports on December 15, Queensland will introduce them to enter hospitality venues on December 17 and Victoria has vowed to keep jab requirements in place well into next year.

Mr Morrison, who is under pressure from pro-choice politicians in his party, on Thursday said the only mandates he supports are for health workers. 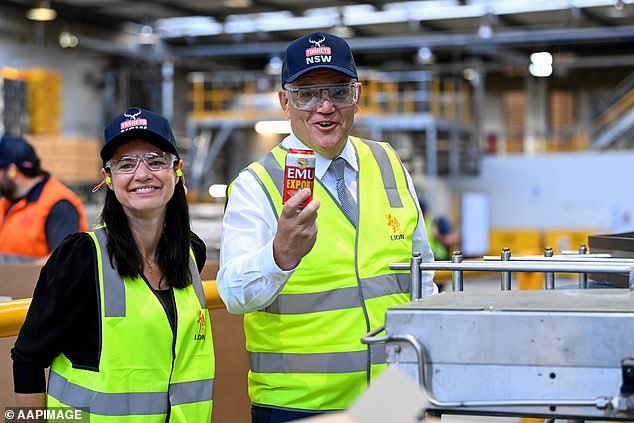 In a dig at Queensland Premier Annastacia Palaszczuk, he said unvaccinated people ‘should be able to go to a get a cup of coffee in Brisbane’.

‘Now it’s time for governments to step back and for Australians to take their life back,’ he said during a visit to the Tooheys brewery in Sydney on Thursday.

‘We aren’t in favour of mandatory vaccines imposed by the Government. Businesses can make their own choices on the law but we aren’t about telling them or Australians what to do.

‘Vaccines are only mandatory in cases where you have health workers working with vulnerable people.

‘That’s what our medical advice has always been and, as we get above 80 per cent in particular… they should be able to go to a get a cup of coffee in Brisbane regardless of whether you’ve had a vaccine or not.’

Queensland Deputy Premier Steven Miles hit back at at the prime minister, accusing him of backing ‘dangerous fringe elements’ such as the anti-government protesters in Melbourne.

‘He is so desperate to claw together a coalition of anti-vaxxers for his own political benefit that he is undermining confidence in our vaccine,’ the deputy premier told parliament.

The planned venue mandate has boosted vaccine uptake, Mr Miles said, and was a deserved reward for those who had done the right thing and got the jab.

‘They do not deserve to be undermined by a prime minister more interested in currying favour with coffee baron donors and lunatic backbenchers than the health and the jobs of Queenslanders,’ Mr Miles said.

It comes after two Liberal senators and Pauline Hanson’s One Nation vowed to withhold support from the Government unless Mr Morrison takes action to stop vaccine mandates.

If Queenslander Gerard Rennick, South Australian Alex Antic and One Nation stick to their guns then Mr Morrison will be unable to pass any contested laws next week.

Senator Hanson, who is unvaccinated, has introduced a bill to over-ride the states and ban vaccine mandates.

Last week Mr Morrison railed against Covid vaccine mandates, saying anti-vaxxers should not be demonised for ‘making their own choices’.

The Prime Minister made the comments in a TV interview after former NSW premier Bob Carr called for anti-vaxxers to be stripped of their Medicare reimbursements if they need Covid treatment.

‘We don’t have a mandatory vaccine policy as a Federal Government. It’s not something we’ve done, we respect people’s choices,’ Mr Morrison told Seven’s Sunrise.

‘We live in a country where we are not going to go around demonising those who want to make their own choices. It think that’s very important. That’s not how my Government sees it,’ Mr Morrison said last week.

‘Of course we want people to get vaccinated but we are not going to take that heavy-handed approach which the Labor party always seems to like doing, whether it’s Bob Carr or many of the others who have come down with those types of views.

‘It’s not our approach’.

The comments contrast with Mr Morrison’s rhetoric last year when he said in a 3AW interview in August 2020: ‘I would expect it [the Covid jab] to be as mandatory as you can possibly make it.

‘There are always exemptions for any vaccine on medical grounds but that should be the only basis,’ he said. 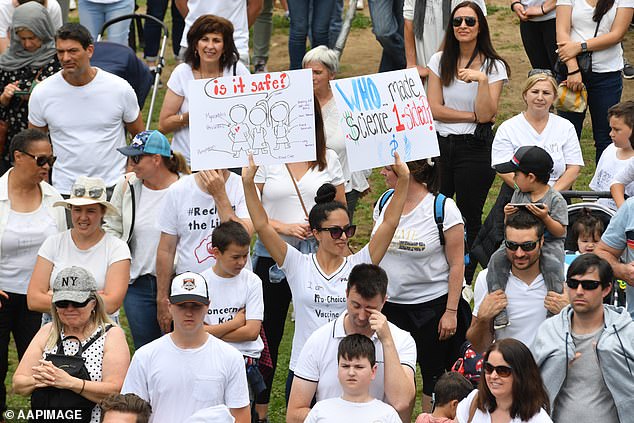 Protesters participate in a ‘Reclaim The Line’ rally against vaccination mandates along the Parramatta River in Sydney on Sunday
The next day the Prime Minister rolled back, telling 2GB: ‘Can I be really clear to everyone? It’s not going to be compulsory to have the vaccine, OK?’

‘We can’t hold someone down and make them take it.’

‘Businesses have that right to say who can come into their premises. That’s what the law says. And that doesn’t fall foul of discrimination laws,’ he said.

Mr Morrison has implemented polices to encourage vaccination throughout his career.

In 2016 as social services minister he masterminded the ‘no jab no play’ policy which stopped anti-vaxxers accessing taxpayer funded Child Care Benefits, the Child Care Rebate and the Family Tax Benefit.

Mr Carr, a former Labor foreign minister under Julia Gillard and NSW premier from 1995 to 2005, said Australia should follow Singapore which announced it will stop paying coronavirus medical bills of those who are unvaccinated by choice from next month. 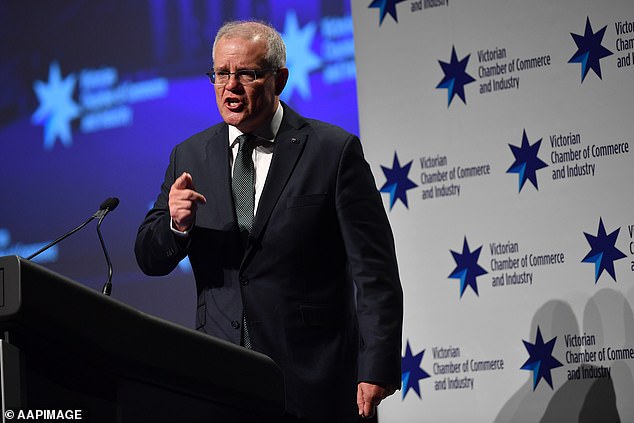